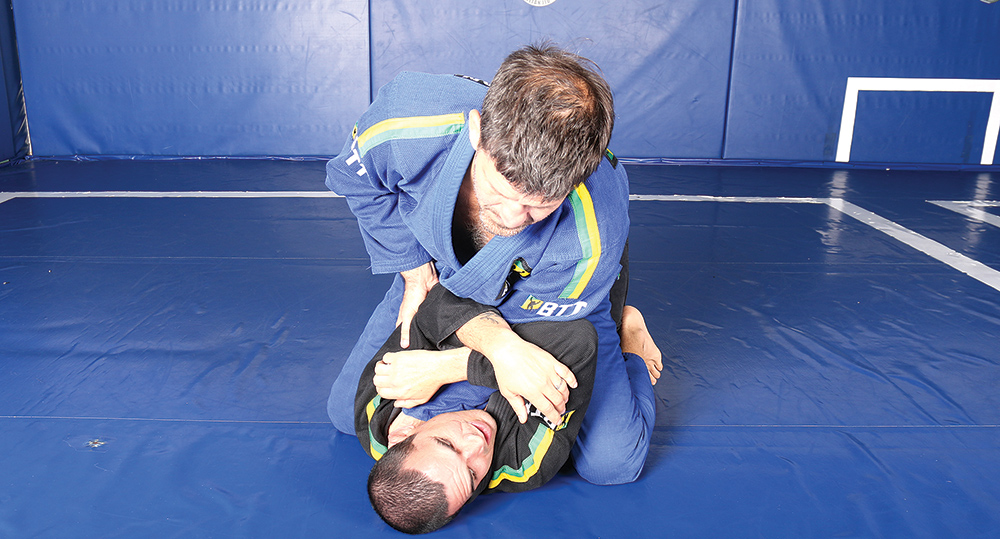 When offered the opportunity to participate in a seminar with a former UFC Champion, jiu-jitsu World Champion and certifiable legend in the jiu-jitsu community, we jumped at the chance. Little did we know that we’d need our mouth guards, ice packs and ibuprofen, courtesy of the leader of Brazilian Top Team. Luckily Juliana Prado stepped in for what you see demonstrated and had just the funnest time as you can see.

Murilo brings his mount up high onto Juliano’s chest, so that it forces his elbows and arms upward. He then grabs just a little lower than midway on Juliano’s left lapel with his right hand, pulling it toward him, while feeding his left hand inside near Juliano’s neck with a four fingers inside grip. Once he establishes the grip, Murilo digs his elbow into the sternum (like in the Over/Over choke), pushes Juliano’s left elbow to the left (toward Juliano’s right) with his right hand. Shifting his hips to his right, Murilo’s left leg remains posted over and across Juliano, while his right knee is near the head and his right hip secures Juliano’s left arm. Murilo focuses all of his weight downward on his left thigh, compressing Juliano’s ribcage to make him uncomfortable and making breathing much more difficult. He then secures the far arm at the elbow with his right hand and brings his left leg inward toward him, so that his heel is behind Juliano’s shoulder, trapping him. With Juliano secured, Murilo gets a thumb-in grip on the opposite side of the collar, with his forearm in the neck (but again, more than likely against the jaw). He then returns his left leg back, going to a very high full mount, turns his left palm upward, and pulls at the grips, while simultaneously dropping his head toward the mat to execute the choke. 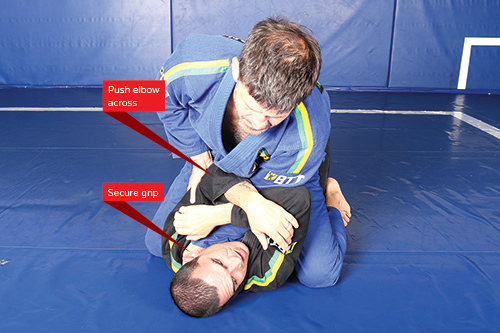