We took a bit of a different approach with May’s Issue of JJM. As evidenced from his Metamoris 4 match up against Dean Lister, former UFC Heavyweight Champion, catch-as-catch-can wrestling aficionado and jiu-jitsu black belt, Josh Barnett is all about controlling his opponents, shutting them down and then finishing. Josh showed us a variety of ways to use hand control that can lead to controlling your opponent’s movement, using it as a takedown, or finishing them off with a submission.

Josh explained to us the concept of hand control. Like many concepts in grappling, it can be used both offensively as well as defensively. Throughout this article I’m going to show you different applications of the concept. Most of the examples will be from an offensive posture, as Josh likes to be on top. Every demonstration of the hand control concept is from a dominant or neutral position. If Josh finds himself on his back to his opponent his goal is not to counter with some attack from the guard, it’s very simply… GET UP! The idea of controlling your opponent’s hands might seem pretty obvious and on some levels it is. In jiu-jitsu we think about our grips, not letting our opponent make grips on our gi’s for instance when standing up. However, the simple goal usually is to just break the grips. The concept of hand control goes one step further; it would be to break the grip and then control the hand. If your opponent breaks your grip, get it again, and again, and again. Fight for control of the hands. Regardless of whether you’re in a gi or not, this concept is to control your opponent’s hands, period. Your opposition will find it much, much harder to mount an attack with you controlling both or at least one hand. Defense of their position becomes that much more difficult when you’re controlling one or both hands.

In this article, as I mentioned earlier, Josh only demonstrates this concept from top and attacking positions. I can attest to the fact that the concept is very useful on the bottom, or in defensive situations. After interviewing Josh, I devoted a few weeks to really focusing on the concept in my training and found that it had a great impact on defensive positions as well as offensive. So let’s not wait any longer, let’s get into the concept of hand control.

Standing Hand Control to Takedown, or Shoulder Lock
When standing, it all starts with hand control. Whoever has this advantage can dictate much of the fight standing up. All of a sudden the person with control can pull the arm across, open the arm up for a throw, arm drag, and can basically control the fight standing up. On his feet, Josh will look to do two basic things. Control his opponent’s hands and keep his opponent from controlling his. If his opponent gets control of Josh’s hand he immediately focuses on breaking that grip then getting back on offense to control his opponent’s hand.

Josh uses the term “hand control,” however under close inspection, he’s really grabbing the wrist joint with a very tight grip. In a gi you could substitute this grip with a grip of the sleeve at the cuff. Maybe a pistol grip, or four-fingers grip, however it wouldn’t allow you to perform many of the techniques Josh demonstrates in this article. So the quick lesson, lock onto that wrist.

In Action
Here’s a perfect example of Josh using the hand control concept in action while standing: 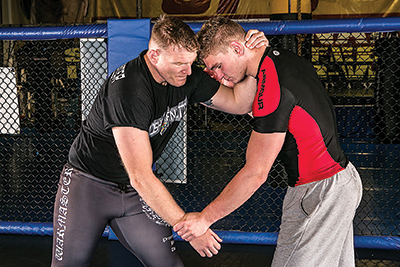 2. Josh rotates his wrist and pulls it away to break Karl’s grip then comes back in to control Karl’s wrist. 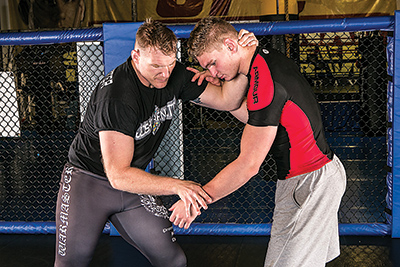 3. The grip of the wrist gets tightened and Josh’s left arm shoots over Karl’s neck and behind his left arm, the arm on the side that Josh is controlling.

4. Rather then lock up a Kimura type grip as you might expect, Josh uses his left arm to pull up underneath Karl’s left shoulder, while leaning back to pressure Karl down at the same time as he’s pulling Karl’s shoulder up near his head. 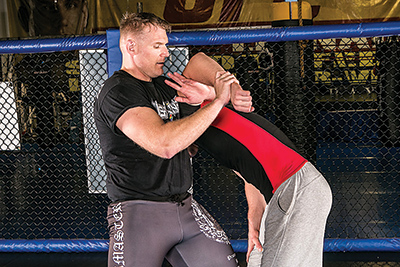