We took a bit of a different approach with May’s Issue of JJM. As evidenced from his Metamoris 4 match up against Dean Lister, former UFC Heavyweight Champion, catch-as-catch-can wrestling aficionado and jiu-jitsu black belt, Josh Barnett is all about controlling his opponents, shutting them down and then finishing. Josh showed us a variety of ways to use hand control that can lead to controlling your opponent’s movement, using it as a takedown, or finishing them off with a submission.

Here’s an example of Josh’s use of hand control to execute a double wristlock that you might get from north-south or an other top position. He’s not going to show us how to get there, but once there, this technique will show you the hand control concept in action and how it can help you get this finish more often.

1. In this position on top, most people would put all their might into pulling back on that arm to break their opponent’s grip and then crank the arm to the back to get the finish. This is definitely one way to get it done, but I think you’ll find Josh’s method much more effective and although much more controlled, it’s much more violent…in a gentle sort of way. 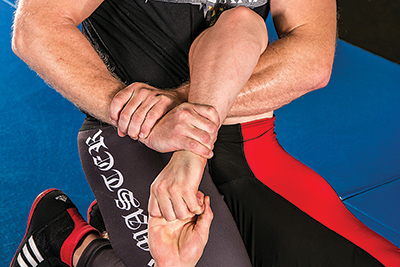 2. The first thing Josh does is adjust his grip of Karl’s hand. Like before, Josh adjusts so that he can wrench Karl’s wrist to pronation. The first thing this does is probably break Karl’s grip, or at the very least it severely weakens it. Secondly, it pre-loads the tendons in his arm to help make the finish that much swifter.