Fenway Park, Lambeau field, Indianapolis Speedway; in sports there are venue that reach out to the masses beyond the names that made them famous. In Solano Beach California there’s a small academy that’s brand new, but not really, that’s quickly creating history. When the world’s best jiu-jitsu practitioners make it through Southern California, as they so often do, this is the room they want to play to. Studio 540 is unlike any jiu-jitsu academy in America, maybe even the world. The man behind it walks the razor thin line between both sides of the Gracie family and does it with friends on both. His academy is free of the politics that unfortunately infect so many studios. It’s truly a place that’s free of secrets and any “cretonne” talk. Robert Zeps is someone we can give great thanks to for helping bring Metamoris and the modern day super fight into the lexicon. Recently I made the two-hour trip down to Solano Beach from Chino and had the pleasure of sitting down with him. I had met Robert many times before, but I was finally going to see and experience what everyone had been talking about. 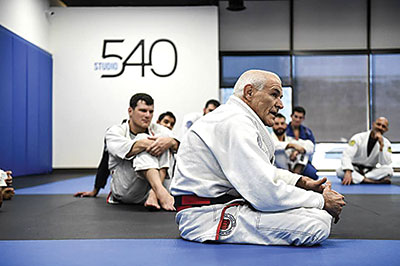 As the man behind Studio 540, is Robert is a Gracie Barra brown belt under Nelson Montero. Prior to training jiu-jitsu he’d been training Japanese Karate and Aikido for more than 25 years. About seven and half years ago someone suggested he try Brazilian jiu-jitsu while living in San Diego. He didn’t know much about it, but had seen it in the UFC. He was so deep into the other arts he didn’t think to give it a try until someone convinced him to. He had a quick private lesson with Nelson Montero in Encinitas. Though Robert had a distinct size advantage over Nelson at the time and he figured he could at least hold his own. Nelson submitted him in seconds, every time. An experience like that for someone that’s been practicing other martial arts for decades might have found it humiliating, but that wasn’t the case for Robert. He realized that this was something that he definitely wanted to do. He signed up for classes with Nelson and has been a Gracie Barra student ever since. Not long after beginning his journey Robert took a course offered by the Gracie Academy for instructors of other martial arts. He was thoroughly impressed with the teaching methodology and forged great friendships with that side of the family. In fact his school, Studio 540, before it was called Studio 540, was called Gracie Academy Solano Beach and was simply a certified training center for Gracie Combatives. Slowly the school transitioned away from other martial arts and became a jiu-jitsu only school. All the while Robert was continuing his training at Gracie Barra under Nelson Montero. About six months ago Robert’s personal friend, professional surfer  and head of Surfight Academy, Joel Tudor let Robert know that he’d be closing his academy. The two decided to team up and Joel moved Surfight to Robert’s academy to become the head instructor. With him Joel brought a number of high-level black belts and a renewed excitement. Soon after the move Robert decided the time was right to rebrand the academy. The address of the academy was Suite 540 so he used that as a holding name until a final name was decided on. Robert felt like Suite 540 sounded like a hairdresser and opted for Studio 540; seeing the connection with the famed New York nightclub of the 70’s Studio 54. He also had the idea in mind that his new branded academy wouldn’t be a brand to go out and conquer the world, but really to be more like a club that anyone from any school could visit and train at.

Studio 540’s doors are open to everyone, Roberts own relationships with both the Gracie Academy and Gracie Barra sides of the family give him a true understanding for the differences in the approach to teaching. He believes that the two are much more similar than either would care to admit. Robert described a story of Renner Gracie explaining the different teach styles as making a cheeseburger. Someone can tell you that you must put the mustard first, followed by the lettuce, then the tomato, etc. But at the end of the day however you make it it is still a cheeseburger.

Bringing Out The Big Guns

The studio was really born when Joel and his students came ashore. This melding of students from different lineages set the tone for a politics free zone of practice. About this time the 2014 Pan Ams were in Southern California and Robert’s good friend Braulio Estima was in town. The two have connections back in Birmingham England, so Robert asked Braulio if he’d come down and teach a seminar. Braulio was excited about the chance. Robert didn’t like the idea of charging people for experience so he decided to offer it for free to anyone who’d like to come. The result was overwhelming and drew around 90 people from schools all across the area. Robert really felt this was a great experience for jiu-jitsu since many of these students coming together were from different schools that had never met before. Coming together under these circumstances and say not at a tournament gave a different feel to the experience. From that point Robert offered the seminar to Roger Gracie who jumped at the chance and again it was a great experience for everyone involved, free of course. Next up Robert ran into Buchecha at the Pans and asked Buchecha if he’d do a seminar, his answer was “of course.” Since then a who’s who of the jiu-jitsu world have conducted free seminars at Studio 540. It’s become the norm that fighters contact Robert for the chance to offer a seminar at the studio.

So far the most people on the mats for a seminar has been 120 people for Joao Miyao. I asked Robert what happens when capacity is reached. The only person at this point that Robert believes would pose a real problem in terms of capacity is Marcelo Garcia. Robert says that he’s going to make that happen and is working on the plan to accommodate that anticipated crowd. Robert’s created this school as a labor of love, every day he wakes up packing his jiu-jitsu bag thrilled at the chance to roll while helping to create a place that people are wanting and willing to make a pilgrimage to.

Push Your Game Up