SINGLE HANDED STRANGLEHOLD COUNTER
(Applicable to self-defense)
Instead of attempting to only strangle Pedro as seen in the last technique, Luis holds Pedro’s neck with only one hand, while pushing his weight forward for control. He may be verbally threatening him by pointing his finger at him or preparing to punch him with the free hand. Immediately, Pedro tucks his chin, raises his right hand so it is level with Luis’ arm, aggressively turns his entire body to his left, and strikes Luis’ arm with an open hand palm strike. This forces Luis’ grip to break and for him to fall forward. Pedro reacts quickly by turning forcefully to his right to elbow Luis in the head. Upon being struck Luis’ head drops slightly and Pedro becomes the attacker using the same guillotine choke as executed in the second technique shown earlier. 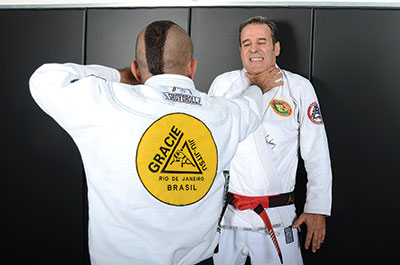 1. Attacker is taunting and verbally threatening you 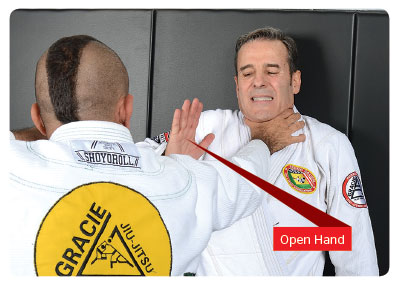 2. Bring your arm up to the same level as your attacker 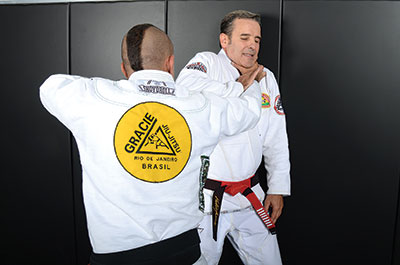 3. Explosively turn your body and strike your attacker’s arm with your palm

4. Twist your body in the same manner in the opposite direction and elbow your attacker

5. Wrap your attacker’s neck and apply the guillotine.