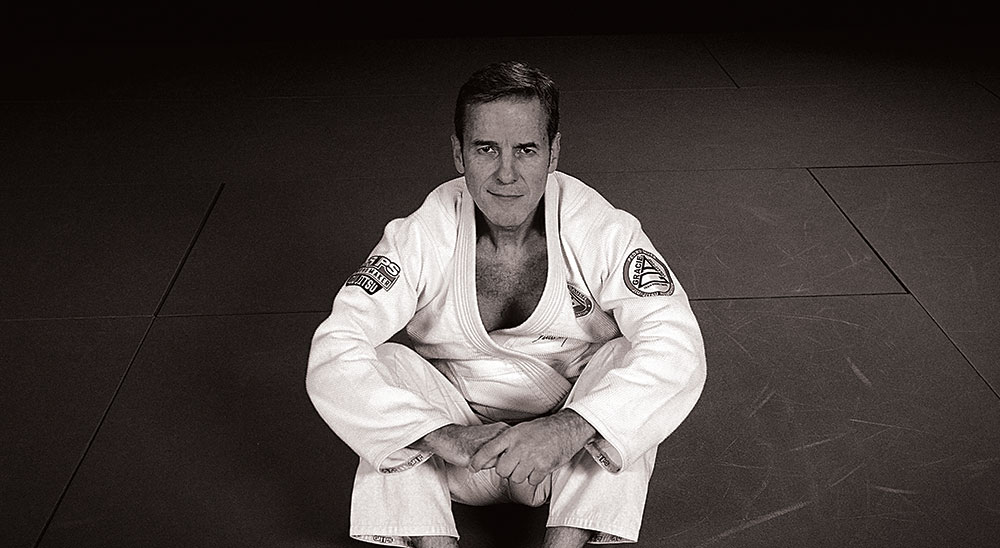 If you weren’t signed up with Jiu-Jitsu Magazine prior to August of 2012, you may have missed out on one of the best interviews and technique articles we’ve had to date in Issue 9. Our co-feature that month was on Pedro Sauer. In the article he touched on a variety of topics from his humble beginnings, how he came to finally teach, his first experiences in America, his constant fighting for years defending the Gracie name in the Gracie Challenge, and more. As a short recap (and if this is your first introduction to Pedro), he is the first red/black coral belt who isn’t a Gracie. He’s received promotions from Relson, Royler, Rorion and Grandmaster Helio Gracie. While this is quite a feat, it should be noted that Pedro’s main experience from white to black belt was under the guidance and tutelage of Rickson Gracie. We were able to experience a very, very small taste of that when prepping for Issue 26 (with Rickson) and it was more than eye opening and definitely mind blowing to say the least. Due to being so highly technical, and holding jiu-jitsu so dear to his heart, Pedro is the first non-Gracie outside of the family to be allowed to use the title “Gracie Academy” for his schools.

This is but a small glimpse into the profound life of the 8th degree Rickson Gracie black belt. Should you need more evidence of how truly great his spirit is we suggest you check out his fight against a former Mr. Utah bodybuilder who outweighed him by 100 lbs through this link http://iroll.tv/?p=6468, listen to his wisdom about why it’s important to deal with an opponent who does the unexpected (http://iroll.tv/?p=4126), find a way to get a hold of Issue 9 (one of our three best selling issues), and check out other videos by searching “Pedro Sauer” on www.iroll.tv. His teachings emphasize simple movements that are effective and can translate into useful tools on the competition mat, MMA, or in self-defense situations. Through his diligence toward, not only preserving the art, but also sharing its positive aspects and teaching technique to the highest degree, through worldwide online polls he has been named in the past as the “Best Brazilian Jiu-Jitsu Instructor.”

To find out more about Master Pedro Sauer or to find one of his affiliated schools near you, please check out www.pedrosauer.com.

FRONT BEARHUG OVER ARMS COUNTER
(Applicable to BJJ, MMA and self-defense)
First, Pedro settles his weight down by slightly squatting to give his body a firm base so he is heavier should Luis attempt to lift him or take him down. He then places his hands on Luis’ hips and straightens his arms to create a frame. This frame provides him the space to execute his counter attack. Walking to his right side Pedro positions his foot next to Luis’ left foot, grabs Luis’ belt with his right hand and Luis’ right triceps with his left. Next, he pushes his weight forward so Luis’ left foot becomes light and all of his weight is on his right foot. Pedro now brings his right leg through the earlier mentioned space, pivots slightly on his left foot and places his feet directly in front of Luis’. With his hips directly in front of Luis’, he pushes upward with his legs from the squatting position, lifting Luis in the air, and twisting his torso to throw him to the ground. Keeping control of Luis’ extended right arm with his left, Pedro places his right knee on the ribs and shin into the armpit, while his left knee pins the other side of the arm. To finish he quickly swings his left leg over Luis’ head, leg curls it down toward the mat, maintains control over the arm, secures the wrist with his right arm, sits back, pinches his knees together, and raises his hips to finish the armbar. 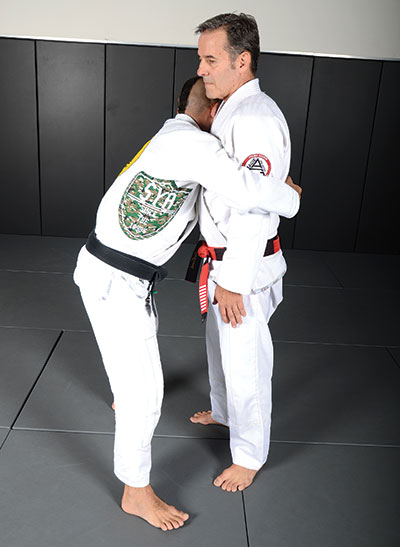 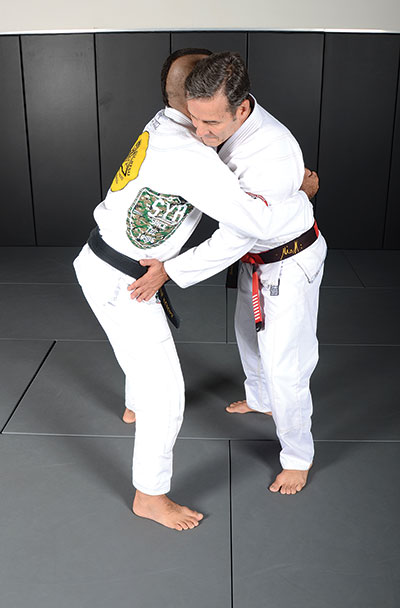 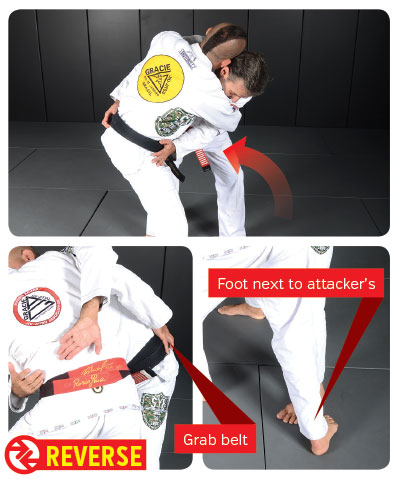 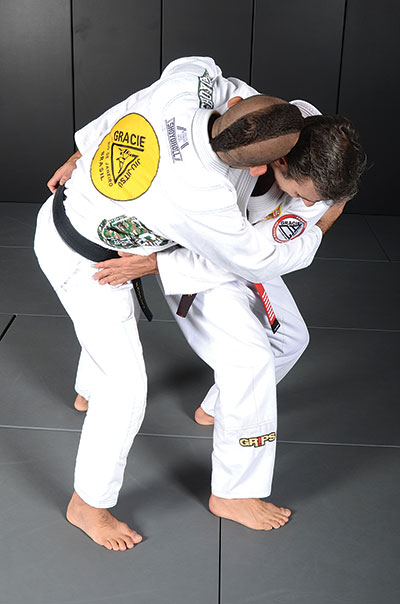 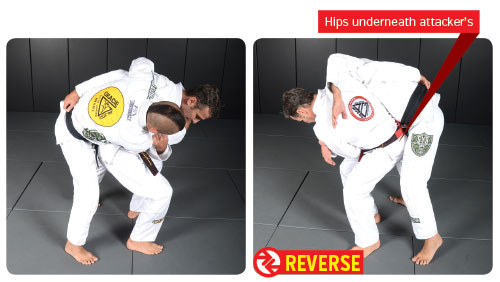 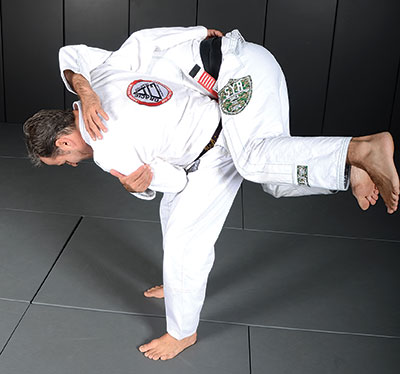 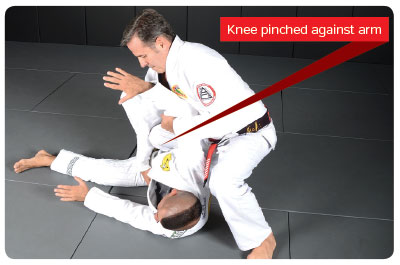 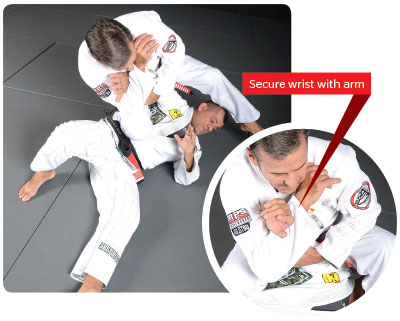 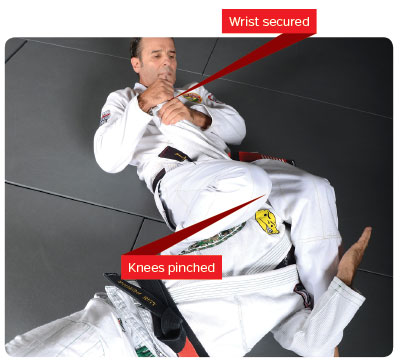 9. Sit back for finish