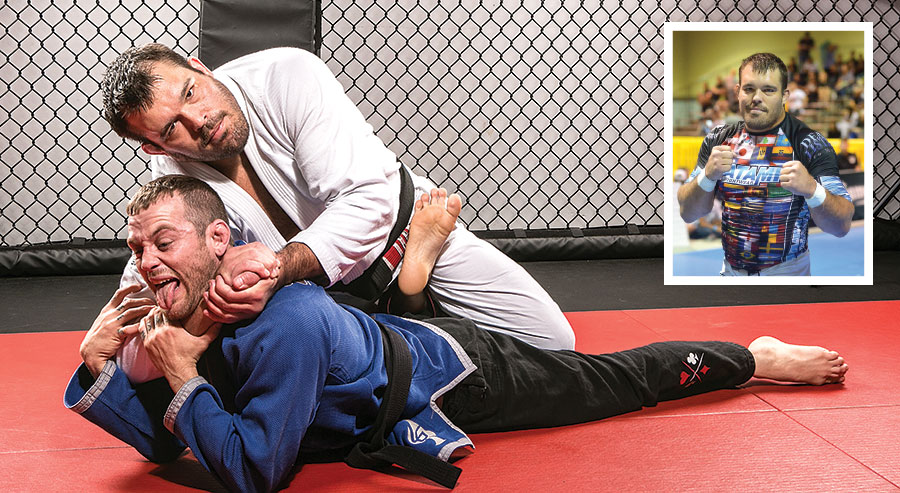 Knowing The Kneebar With Dean “The Boogeyman” Lister.

The mysterious kneebar; what it is, how does it happen, how do you do it, how do I defend it, will my knee pop off if I get caught in one? These are all questions that have surely entered anyone’s mind as a white belt. One man who’s managed to use the leglock as his friend over the years sheds some light on the subject. That man is Dean Lister. In the world of jiu-jitsu few have reached the pinnacles of success that Dean has. Dean won the Absolute division at the 2003 ADCC, beating legends in the sport as a 26 year old brown belt. Today, Dean has amassed a respectable career in jiu-jitsu as well as professional MMA having fought in Pride, King of the Cage Championship, and has a winning reccord in the UFC. We had time to sit down and learn some amazing kneebar finishes with Dean and get to know him a little better.

How did you get into jiu-jitsu?
I was already into high school wrestling and I heard about Gracie Jiu-Jitsu. It seemed like something I wanted to try. I was already doing sambo. Sambo guys usually have good submissions from throughs, but generally don’t have a good “ground game.” I was already doing submissions and jiu-jitsu made more sense to me than having to pin someone from on top. I took my first class with Fabio Santos here in San Diego and I loved it. Been training ever since.

Did you grow up here in San Diego?
I was born here, but raised all over the world. My father was a US Marine. I grew up in Venezuela, Panama. That’s probably why I became a fighter. If you’re the only kid that looks one way, and everyone else looks different, you’re going to get picked on. Unfortunately, it just seems like human nature. I don’t blame the Panamanian kids for hating me, a lot of their people lost their lives when we went in there back in ’89. I don’t blame them for hating us. I’d say a few times a week I’d get into a fist fight. Sometimes with one kid, sometimes two. That desire to defend myself is what ended up leading me to jiu-jitsu, now that’s my life.

Back then you were about twelve years old, were you big for your age?
No, back then I was small. It wasn’t until I got to about 17 years old that I got bigger, I grew real fast.

What’s your ethnic background?
I’m all kinds of things. I kid around and say I’m a white guy that can tan well. I’m not latino at all, but I can pass for it. I speak Spanish, Portuguese. I’m one quarter Apache, Native American, French, Scottish, Dutch, and probably a few more things. I need to go to Ancestory.com to check it out.

When did you earn your black belt?
I got it in 2003, after I won the brown belt at Abu Dhabi. It was a little controversial. I split up with my first instuctor. We had a split up, and I started my own school. At the ADCC I lost in my weight division to Xande Ribeiro on points, by a lot of points. Usually I’d only lose by just a couple. Then somehow I got into the Absolute division, I was like the fourth alternate. In the first round Xande lost to “Cacareco” (Alexandre Ferreira) with a footlock. At the time Cacareco was like the best Brazilian with footlocks. So then I beat Nate Marquardt, Saulo Ribeiro, Marcio Pe De Pano and ended up facing Cacareco in the final and won with a footlock. That was when I saw my own way of using jiu-jitsu. When I got back, my friend Jeff awarded me a black belt. Said it was crazy that I didn’t have it considering who I beat at the ADCC. That sparked some controversy with him and Fabio Santos. Politically it wasn’t correct. It’s all been made up now and we’re all cool now.

How did you get to become so comfortable and known for your footlocks?
When I was younger, maybe as a blue belt, I was told that footlocks were not so technical. The choke is the King, the armlock is the Queen, and the footlock is the dirty theif in the night. It’s not comparable, even though it’s a submission. I never listened to that. I think they’re all submissions. If I footlock someone it’s probably because they’re high level, they’re good at guard, they’re hard to pass. As I’m passing, their legs are in the way so I’ll go for a footlock. If they’re a wrestler they might go to their knees, in which case I’ll jump on the back and go for a choke. Depends on who I’m facing. I can do all those other locks, but it’s usually against advanced guys that I get the leglocks on because that’s where the opportunity is. When someone defends my leg locks I can usually pass their guard. So the two skills really complement each other. They defend the pass, I go for the legs, they defend the legs, I go for the pass. They pair up perfectly.

Do you bait with the leglocks or the pass?
All the time. I beat Rodolfo Viera, the great Brazilian fighter.  I was across the side of him and I gave him a little bit of space because I knew he was going to replace the guard.  He did, and that was enough for me to get his leg. If he didn’t try to put me in guard I wouldn’t have gotten the leg lock. He’s a high-level competitor, he’s going to play his game. By the way, I bring up these guy’s names with nothing but respect. I have huge respect for all my competitors. These are all high-level guys. I really respect them a lot.

What’s your conditioning like?
Conditioning is never easy, but it’s very simple. If I’m training for MMA I’m going to do more boxing, kickboxing, wrestling, and jiu-jitsu. With jiu-jitsu and Metamoris 3 I’m going to be rolling a lot, hard! I may go on some runs. I trained Rulon Gardner at some point and asked him how he got so strong and he said, “I just wrestle. While other guys would go run I’d wrestle more.” I’ll run if I have to lose weight. I hated hearing this type of answer when I was young, but all the greats at jiu-jitsu would tell me to roll more. I’m not doing chin-ups in a match, I’m pulling on an opponent; so the more I can do that the better I’ll be prepared. Everything can help a little I suppose, but I have 100% crossover from training into my matches.

In all my training I start from bad situations from the bottom to get on top. I earn my way out of submissions to get submissions. It’s because of this I’m pretty resilient, it’s hard to finish me, and I have good defense. It’s cliché, but people say the best defense is a great offense, but if you’re always on offense then your perfect. No one is perfect and it’s impossible to always be on offense. I practice my defense to set up my offense. I start in a triangle or an armbar and it makes my muscles stronger, as well have double of a workout than that of my training partner.

So you’ll actually start in a full on submission?
Yes, I will. My arms may be locked while defending the armbar or it will be full extended and my partner will go 30%. These are only done with trusted training partners. We’ll start in Kimuras, Americana, heel hooks, and other twisting submissions where the partner will only hold the position. At my school no one ever gets hurt from heel hooks; it’s always from wrestling or falling. We’ll start in armbars, triangles, and footlocks with pressure and escape as well. If you tap, it’s no big deal because you’re training yourself how to learn not to tap.

How’s your diet?
I used to be more diciplined when I was younger. The personality of a fighter usually isn’t a guy that sits around and eats carrots all day. I guess if you have that type of personality it’s great. But that’s not me. My diet’s on point when I want or need it to be.

Any advice you’d give to other practitioners?
“Your mind is like a parachute; it only works when it is open.” Have an open mind. Even if someone doesn’t practice jiu-jitsu you can learn something; from a wrestler, from a sambo player, a lower belt, someone overly calm, some people with a temper. You can learn from anyone. Know what you’re good at. If you’re a blue belt and good at triangles you can build upon that. Could be a different move, but it’s your go to move, and you can build your style temporarily around that strategy. This will build your confidence and once you have that you can start learning a lot better.

Do you have any upcoming events or projects?
I have two new websites www.deanlisterleglocks.com and coming soon will be www.subhumanz.com with Jeff Glover. Also my DVD “K.A.T.C.H. Leg Lock Systems” just came out and of course my match against Babalu at Metamoris 3 on 3/29/14. Also, I have a Fight House Program. It’s about $35 a day. The fighters get to come train, a room to stay in at the beach, full kitchen, place to hang your gi, alkaline drinking water, even cable TV. It’s shared living, four beds in one room, but it’s on the beach and you get to stay with me. Shoot me an email if you’re interested, deanlister@gmail.com.

Dean’s Fundamentals of the Kneebar

Tuck the foot between your neck and shoulder, with the Achilles firmly in the crook of the elbow. Go the extra mile and grab the foot by the toes with your other hand and lock it down by placing your free hand on the crook of your other arm to create a figure-four, as if you’re performing a rear naked choke on the ankle.

The reason Dean likes to use his arm closest to the mat to attack the leg is because this side is less likely to be pushed away. When Dean uses his other arm to attack the leg his opponent can use their free leg to kick the arm off at the elbow. When the lower arm is trapping that counter is taken away.

Many people tend to perform the kneebar with the leg caught behind the high-side arm. Dean says this is great if you happen to get it. However, in the transition from taking the leg from in front of you to behind your arm, there’s the instance when you have to loop your arm around the leg. At this moment your opponent has an opportunity to turn out of the hold. This is why Dean prefers attacking the leg as he does. 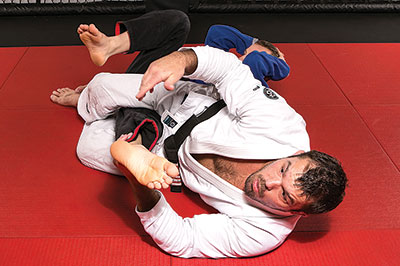