If you’ve got a sweet tooth, but don’t want that Twinkie that’s full of a ton of calories, need a quick pick me up, or feeling just blah; berries may be just what the doctor ordered. Berries are great for a healthy eating lifestyle because they are rich in antioxidants. Antioxidants protect your body against inflammation and free radicals (molecules that damage cells and organs). They also have a low-calorie high-nutrient ratio, low glycemic-index, provide energy, are loaded with fiber, assist with weight management, can be cancer preventive, provide a delicious & sweet alternative to junk food, and more. 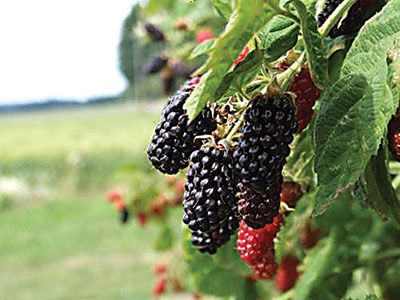 The most commonly known berries we eat are strawberries, raspberries, blueberries, and blackberries. Or are they? Contrary to what most believe, none of these are actual berries, according to the botanical definition. The word “botanical” relates to botany; which is the study of plants. Technically, a true berry is a single fleshy ovary that grows into a fruit with no barrier in between the seed and the juicy portion that is eaten. Strawberries, raspberries, and black berries are compound fruits and blueberries are an epigynous fruit. In general terms (for us non-botanists), and for the sake of this article, berries are small, juicy, colorful, fleshy fruits.

Strawberries
Strawberries originated from France during the late 18th century. They are an excellent source of Vitamin-C and manganese. Eating one cup a day can complete 100% of an individual’s Vitamin-C DV (daily value). Vitamin-C is crucial for humans as we are the only mammals that cannot self-produce it. Vitamin-C strengthens and protects our eyes, fights bad cholesterol, and regulates blood pressure. Manganese is a mineral and essential nutrient because the body requires it to function properly. It’s used for treatment of osteoporosis (weak bones), anemia (a decreased number of red blood cells), and PMS (premenstrual syndrome). 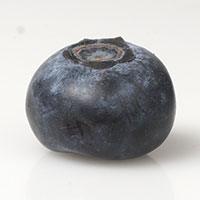 Blueberries
Blueberries are native to North America, which is where 95% of them are cultivated. Blueberries have been shown to assist with improving memory, and the cardiovascular systems function. They also help prevent stomach ailments, heart degeneration, and heart diseases. 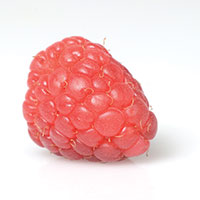 Raspberries
Raspberries originated from Eastern Asia. There are actually over 200 species of this berry, with red being the most popular. Like strawberries, raspberries have a high content level of Vitamin-C and manganese, as well as Vitamin-K and magnesium. Vitamin-K assists with preventing blood clots, preventing heart disease, and building strong bones. This vitamin works hand in hand with Vitamin-D and it should be known that without each other, neither works optimally in your body. Magnesium’s benefits include energy production, balance of your nervous system, and preventing decreasing loss of bone mass. 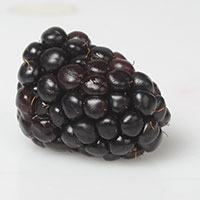 Blackberries
Before coming to the US, the Himalayan blackberry came from Europe in the 1800’s; however, the fruit itself is from Armenia. Blackberries help improve motor and cognitive skills, heart function, and promote oral health. Blackberries are also relatively high in fiber, this is because the “torus” stays with the berry when picked, versus a raspberry where the torus is removed when picked.

Some studies have shown that organic foods are smaller in size, but have a denser nutritional value. In one study, organic strawberries for example, have almost 10% more Vitamin C, and are almost 9% higher in antioxidants as compared to those chemically grown.

Something most of us don’t pay attention to, in the whole organic vs non-organic debate, is that the soil in which the organic foods are grown is that of higher-quality soil. What difference does that make you may ask? It means a healthier eco-system so that the food being produced has much higher levels of nutrients, such as zinc, boron, sodium, and iron, just to name a few.

A problem with this study, though, is that it was controlled. You probably just asked, “Huh? What? Doesn’t that make it better?” Well, it does because you’re eliminating variables, but it doesn’t because cultivation processes, nutritional content of the soil, along with many other factors affect the quality of the fruit (organic or not) and these are all completely different from farm to farm.

Non-organic berries are typically less expensive than organic berries and sometimes have a longer shelflife. I for one would recommend going organic if your budget can handle it. Since you’re eating the entire fruit you’d be exposed to any pesticide residue that might be on the berry even after a thorough washing. 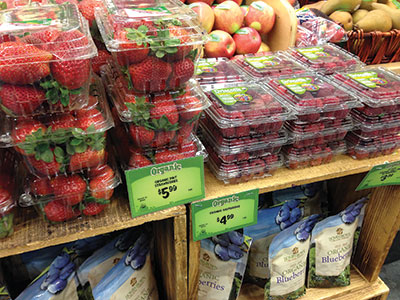 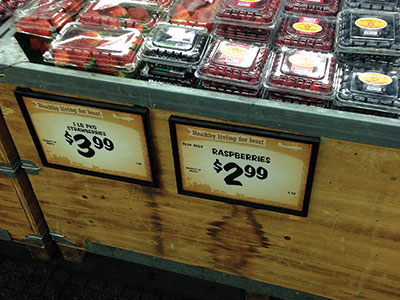 Organic usually comes at a increased price. The benefits are debatable, however organic’s don’t have the pesticide residue found on conventionally grown foods. 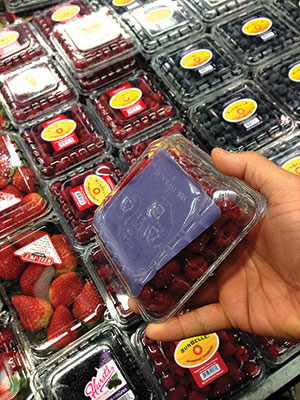 Berry type and age at time of purchase determine shelf life. Check that all berries are unblemished, free of mold, are fresh looking, and have no signs of leakage. Ideally, you want all berries to be firm, plump, bright with rich color (no red/purple blueberries and no non-red raspberries), and in the case of strawberries, have bright green stems fully attached. Next, smell the berries, as those that have the most fragrant smell usually are fresher. Keep in mind that berries grown closer to your local area will typically smell better, be juicier, sweeter, and taste better because they don’t have to deal with the added distance and time of shipment. If you purchase prepackaged berries, check that they’re not packed too tightly; otherwise you may get a few that are crushed. Berries are usually stacked on each other when prepackaged, so you’ll want to check the bottom berries as they can be hidden and may not be ripe. Also, make sure there’s no mold or stains (juice leakage) on the package either. The best time to buy is as follows: blueberries and raspberries are in season from June through August, strawberries between April and July, and blackberries starting in May through July. 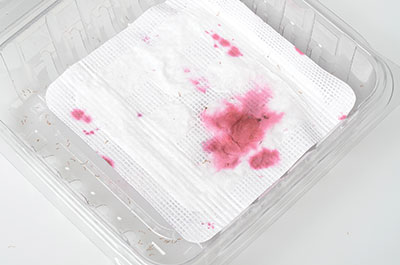 Visible juice residue at the bottom of a container is a sign of berry damage or spoilage. 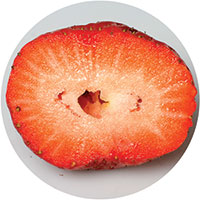 Medium size strawberries have more flavor, as larger sized berries can be hollow. This leaves more water in the berry and ruins the taste.

Proper Care of Your Berries
Now that you’ve purchased your berries, you need to take care of them. Do not wash them until you decide to use them. The added moisture will create mold & possible infection. When you decide to use, remove all stems, wash, and drain them thoroughly. Refrigerate them at home as a cool temperature is the key to longevity of the berries. Stored at temperatures of 33-34° F, berries can achieve the following shelf lives after purchase: 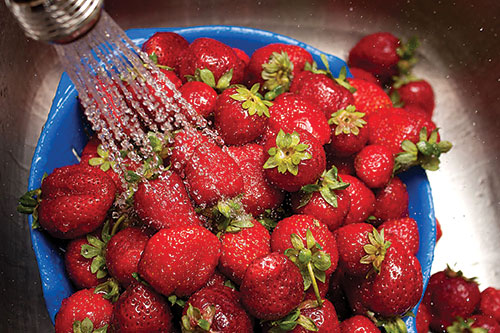 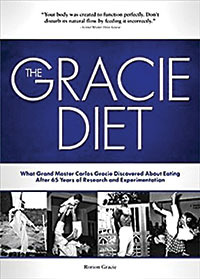 Though he wasn’t a professional nutritionist, through research and experimentation, Carlos Gracie, Sr. developed the Gracie Diet. He did so with ideas to avoid acidic compounds causing negative results in the body, such as indigestion, longer digestion periods, less energy gain from digestion, sickness, etc. when combining the wrong foods together. The diet is also said to improve energy, which essentially allows you to train harder with less fatigue, thus assisting a fat burning for weight loss. Consumption of fruits is big with the diet and as a result, the immune system is greatly strengthened. I’m only going to touch on the portion related to berries.

Strawberries, blueberries, raspberries, and blackberries are all considered to be in Group D (Acidic Fruits & Milk Derivatives). The diet states to not combine acidic fruits with each other or anything else, acidic fruits should be eaten in the morning, and eat as much as you can in one sitting. Juicing the fruits is fine.

There is no scientific evidence to back the diet as far as the claims go, but there’s also been no study (other than self) to debunk it. Rorion Gracie stated in the past, “In order for any diet to be validated it should be tested or followed for 30 or 40 years. So that by then, one can see the actual result it has produced. Most diets do not go through this endurance test and that is why they become ‘fad diets,’ in other words, they come and go. The Gracie Diet has been in use for 75 years and it has transformed the lives of thousands of people around the world. Uncle Carlos lived until 94 and my father until 95. In fact, the last time I visited my father in his ranch in Brazil, he was 94 and 6 months, he gave me a hug and a kiss and said, ‘Rorion, let’s go on the mat, I want to show you a new choke I have been working on.’ The Diet not only gave them both, long fulfilling lives, but they had a good quality of life as well.”

I had the chance to meet Helio back in 1998. He was 84 years old and had so much energy it was ridiculous. By contrast, I was 21 years old and a competitive college distance runner. Based on my own personal experience of applying it this past year, it works.

CONCLUSION
Berries can help your jiu-jitsu game in regard to both your physical and mental game. Whether you are looking to gain more energy or drop some unwanted pounds, consuming berries can do either. By improving your motor and cognitive skills, you’ll be better equipped to attempt certain maneuvers. After all, we are playing human chess. Remember, you are your own best doctor by taking care of yourself. Roll on my friends.