In the promotion of his match against Kit Dale leading up to Metamoris 4, we got a glimpse of Garry Tonon and his work ethic. The term “the hardest working man in…” is very cliché, but in the case of Garry Tonon, it might just apply. Garry (with two R’s) hails out of Brunswick, New Jersey and is a black belt under Tom DeBlass. Garry starts every morning with his own training, usually a morning or an afternoon session at one of three academies, Tom’s school, Ocean County BJJ, Ricardo Almeida Jiu-Jitsu or Renzo Gracie Academy (That also happens to be Garry’s belt lineage; (Renzo Gracie – Ricardo Almeida, Tom DeBlass). After his own training and sharpening of his skills Garry teaches evening classes at Brunswick BJJ from 5 until 10 daily. Being just 22 helps with Garry’s hectic schedule and if there was ever a case for “eat, breath, sleep” jiu-jitsu Garry just might be able to make it.

Garry’s made a name for himself in the No Gi circuit and saw a nice rise in his stock after his epic match against Kron Gracie at the 2013 ADCC in China. In that match he somehow avoided a deep armbar and took Kron’s back until ultimately being submitted via Garry’s favorite finish, the rear naked choke. That loss turned into a win thanks to the respect he earned from much of the jiu-jitsu community, along with the organizers at Metamoris who put Garry on the card against Kit Dale at the fourth installment of the event. It was a quick finish for Garry who submitted Kit via guillotine at the 3:40 mark of the match. In this article Garry’s going to show us some of his favorite techniques, including the guillotine he used against Kit at M4.

Do you prefer points or sub-only tournaments?
Sub-only has really opened up my success in competition. I think sub-only tournaments have shaped my style. In training I find myself not as worried about getting my guard passed or passing the guard. I work more with what the person is giving me. Before, I would focus on my passes, sweeps and getting to the back. I’m definitely not afraid to concede position. If I’m on top and I feel like rolling to the bottom so I’ll get closer to getting someone’s back or leg, I’ll go for it. I feel more confident falling back for a guillotine. I never used to get guillotines; that only happened in the past six months.  Sub-only has really opened up my game to so many more submissions; I used to only rear naked choke people.

Is that your favorite finish?
Yeah, still to this day taking someone’s back is still where I want to be. I hear people stressing that it takes a lot of energy to finish, but for me I feel secure there. Occasionally I don’t finish, like the match with Kron, but that’s where I feel most confident. I’m really trying to expand my submission base, but that’s still my favorite.

How about a rematch with Kit in the Gi?
I really respect Dale for fighting me in my style, with all the heel hooks, leg locks included. If I’m going to consider myself a true martial artist I should be willing to accept his challenge in his style. I know that Kit’s had more success in the gi, so I’d do it. I’d train for it in the gi and I still think I’d be successful. 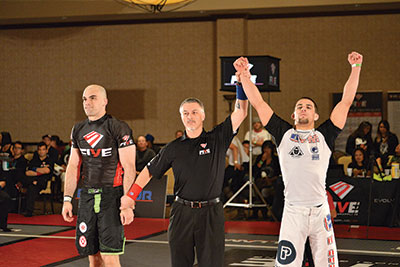 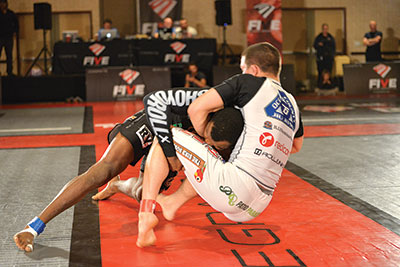 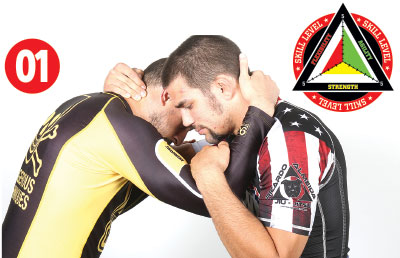 If you watched Metamoris 4 you’ll recognize this choke – it’s the high-elbow guillotine that Garry submitted Kit Dale with. Garry starts the move with a wrestler’s tie up. The technique would be very similar in a gi as well.

Starting with collar ties, whenever Garry is looking for an underhook, he’ll drop that side, in this case the left, and then cut in for a short underhook with his hand to his opponent’s neck. 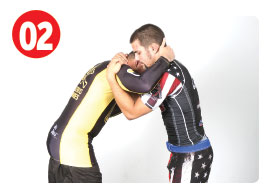 Now Garry has a short underhook on the left side and the other hand on the back of the head. This gives him good control of his opponent’s upper body.
Garry prefers to have control of the crown of the head versus the neck, this makes it more difficult for his opponent to posture up. 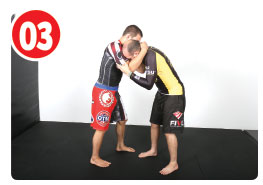 At this point, many people will go for the guillotine, but this would be a mistake. If the opponent postures up too soon he might end up taking Garry’s back. 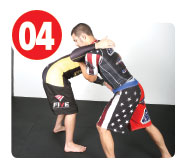 Garry steps back and pulls his opponent down until his head is at or below Garry’s right shoulder. 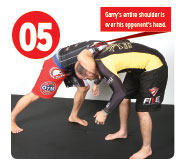 Once his head is down, Garry brings his arm up and over his opponent’s neck. 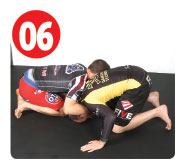 Next, Garry snaps his opponent down to the mat. He doesn’t go straight back, instead he snaps him down to his left, the side opposite his opponent’s head. This puts the most amount of pressure on his opponent. 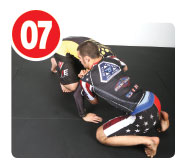 When his opponent hits the mat he’s forced to at least post with one hand to the mat or else he’s going to smash his head. When he does this it opens up the opportunity for the guillotine. 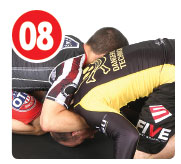 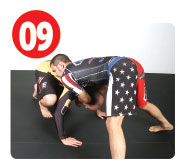 With arms in place, Garry jumps to his toes so his knees aren’t exposed for his opponent to defend with some sort of takedown. This also puts more pressure on the opponent. 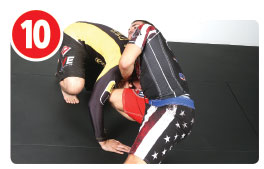 Now Garry picks a side and slides his right arm deeper under his opponent’s neck while bringing his right thigh up along the head. While doing this movement, Garry’s also dropping his head to his opponent’s left shoulder and his left elbow is up high with his hands clasped.
The trick here is not the arm position, but the rotation of Garry’s body. The placement of the knee prevents the other guy’s head from popping out when Garry rotates for the finish. 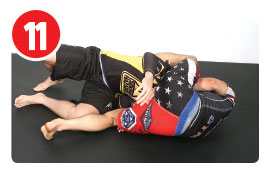 A common way to defend this choke is for the opponent to fall to the side with Garry when he goes for the finish, this is what Kit Dale did at M4. To prevent that, Garry keeps his left leg posted out until just before he goes for the rotation. As he begins to rotate, he quickly brings his left heel up and over to his opponent’s back.
Bringing the leg over helps Garry to go with his opponent and keep the choke, even if he falls all the way to his back. 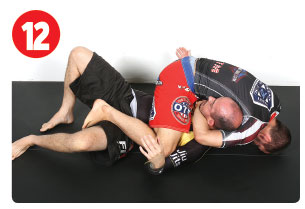 At this point the finish for Garry is to drive his hips down and pull his wrists up.

Post: the act of using a limb or extremity to exert pressure to the mat. Example, if on top in a mounted position and your opponent attempts to revserse you, extending your arm out to stop them and exert pressure on the mat is a post. Can be done with arms, legs, feet, knees, elbows, shoulders, head, etc.