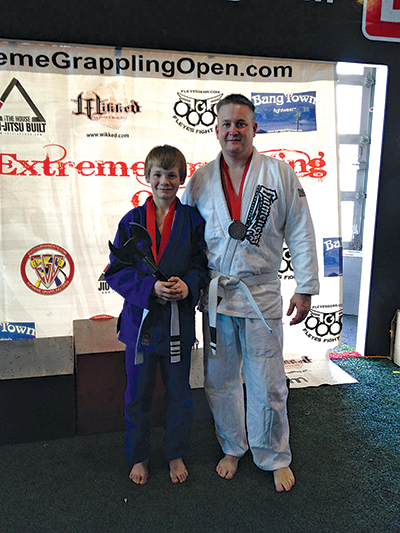 “Dear Jiu-Jitsu Magazine,
In the summer of 2012 I received some disheartening medical news as a result of a routine physical. I was aware that I had put on weight, but completely oblivious to the affects it was having on my health. My weight had reached 230lbs and my doctor gave me approximately three years before he believed I would be dead from a heart attack.
And so, my transformation began. I changed my diet and began running. I lost a few pounds, but nothing noteworthy. In August of 2012, my two sons began training in Brazilian jiu-jitsu to supplement their wrestling training. My son, Ryan was 12 at the time and weighed 132 pounds. I really wanted to train with them and began my actual transformation in October of 2012.

As with a lot of people, I quickly became addicted to the art and began competing. My first competition was in March of 2013. For this tournament, I had to cut weight to make the 205lb weight class. My kids began training in both the kid’s classes at the gym and the adult classes. The true beauty behind my story is that it is not mine alone. Ryan now wrestles in the 106lb weight class and I am competing as a welter weight, under 170lbs. I’d be honored if you’d share my story.”

How did you discover jiu-jitsu?
I first discovered jiu-jitsu watching the first UFC1. As a police officer we had trained some ground fighting in the academy. I felt it was an important aspect of fighting and would help me in the performance of my duties. It wasn’t until my health scare that I decided to get into a school and more organized training with my boys.

What motivates you to train?
I compete as often as I can. Competing is a great motivator to train and stay healthy. I also train because I love the workout, which I believe is key to sticking with any workout program.

How often do you train?
I try to train jiu-jitsu four to five times a week.

What else do you do for physical fitness?
Occasionally I will run on the days when there are no jiu-jitsu classes at the gym. I also take Muay Thai and MMA classes offered by Grove City Brazilian Jiu-Jitsu, but jiu-jitsu is by far my favorite.

Have you changed your diet and how?
My diet has been the biggest and probably the hardest thing to change. I have to limit sugar, sodium and carb intake, but I love all that stuff.

What’s been the biggest challenge so far?
Sticking with my diet. I love training jiu-jitsu, rolling is the easy part. Getting me away from the gym is much harder than getting me to the gym. 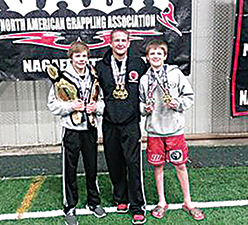 What’s the best thing about the life change?
Where to start… knowing that I’m healthier and will be around longer for my kids. On that note, getting to train and participate in jiu-jitsu competitions with my kids has been an incredible experience.

What advice would you give to someone looking to make the same type of change?
Find a type of exercise that you love and don’t get discouraged with your diet. Like I mentioned earlier, that’s really been the biggest obstacle for me.  It’s a lifestyle change and will take some time, but the end result is completely worth the initial pain and sacrifice.