If you had a conversation with a jiu-jitsu practitioner who received his black belt in the 1990’s, chances are he’d tell you how much the game has changed in so many ways. The evolution of jiu-jitsu has transformed old school fundamentals into its own style, while modern jiu-jitsu has moved to the forefront. New innovative techniques and concepts that were once considered blasphemy are now widely accepted as options. In addition, many competitors today are full-time athletes. That being said, in this day and age athletes are constantly searching for any edge they can get over the competition, whether it be the material of a competitive uniform, specialized conditioning programs, items used to simulate intense training conditions (hyperbaric chambers, elevation masks, etc.), supplements, certain workout equipment, recovery enhancers (both chemical and non), laser eye surgery and a slew of other products, programs or enhancements on the market. The most controversial of all is still, and probably will forever be, PEDs (Performance Enhancing Drugs). While I don’t condone the abuse of PEDs, one in particular is inexpensive, has a ton of data behind it and is not illegal. It’s caffeine. 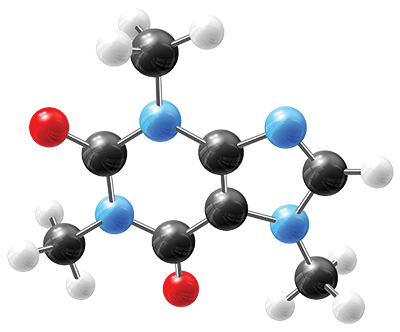 What Is It Really?

Caffeine is a psychoactive stimulant drug that affects the central nervous system when ingested. So, what’s a psychoactive drug you ask? A psychoactive drug by definition is a chemical substance that crosses the blood-brain barrier and affects brain function, resulting in alterations in perception, mood, consciousness, cognition and behavior. Caffeine comes from seeds of coffee plants, leaves of tea bushes and fruits of some plants. It is also found in a kola nut, yerba mate, guarana berries, guayusa and yaupon holly.

If you’re looking to improve performance, but don’t want to deal with anything illegal and something that doesn’t have a lot of negative side effects, caffeine may be something you want to look into. It is legal, unregulated and can be found in a variety of products, such as food (ice cream, chocolate, etc.), beverages (coffee, teas, energy drinks, sodas, etc.), supplements and even medications. It’s relatively inexpensive as well. You may snicker at the thought of caffeine as a performance enhancer, but consider this – the IOC (International Olympic Committee) banned the usage of caffeine until the World Anti-Doping Agency removed it from the banned substance list in 2004. If some of the greatest athletes in the world and the IOC considered it as such then it must have some value toward athletic competition. 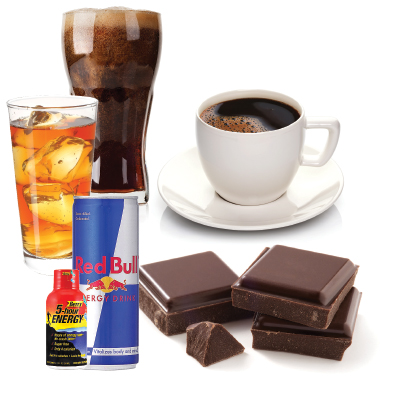 Some caffeine delivery systems are a little healthier than others.

But It Was Banned

It was banned, so it’s got to be bad for you, right? While it is somewhat true that it can be bad for you, here’s where a little bit of math comes in. Under the IOC, a urinary test that returned an amount of 12 micrograms or more of caffeine per milliliter was considered a deliberate attempt to gain an advantage. Trying to break this down to an exact number in terms of just how much caffeine that constitutes is tricky, since no one can truly account for the actual amount of caffeine found in urine on excretion. There’s some conflicting information, but to give you some idea, the average seems to be from 6 to 10 cups of coffee. This amount would need to be consumed within 15 to 60 minutes for optimal pre-event loading. How coffee is brewed can either lessen or enhance the actual milligrams of caffeine within each 8 oz cup, but typically it falls between 95 mg (more watered down coffee) to 200 mg (a higher quality and much finer brew). At worst, athletes would be ingesting 570 mg and at best up to 2000 mg within that time frame. Keep these numbers in mind as you continue to read and this will become clearer as to how abusive this is. Anything in excess usually ends up producing some negative side effects; however, if you follow a specific protocol you can reap the benefits without posing any detriment to yourself.

THE GOOD
Here’s a list of the benefits that caffeine can produce when taken in a predetermined, proper dosage:

If you put all these together, quite a few potential performance-enhancing effects will occur that can really help you while training, working out, or competing. You’ll feel more upbeat and relaxed prior to tournament competition. You may be more explosive during takedowns or throws, be better coordinated, not get tired as quickly, react better, counter quicker, are less likely to make mistakes, can better think about your next move, can use your fat to be burned as fuel and help you recover faster so you can better perform at your next workout or match in the tournament.

How Does This All Happen?

In regard to endurance, caffeine mobilizes free fatty acids from your fat stores or intramuscular triglycerides. These fatty acids then increase oxidation from the fat to be used for energy burn to enhance endurance. Since your fat stores are being utilized, the glycogen (the body’s secondary storage of energy) within your muscles is being spared. Once caffeine enters the nervous system it lowers neuron activity, which adjusts your body’s perception of effort and also allows for greater recruitment of muscle usage. Additionally, the relocation of calcium enhances membrane permeability (the rate of flow of caffeine passing through), which produces more intense muscle contractions by increasing motor unit involvement. Since caffeine is rapidly absorbed into tissues of the body that are higher in water content, our muscles take in high amounts of it because our bodies are primarily water. 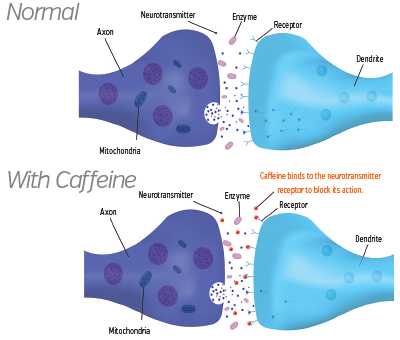 THE BAD
The old adage that too much of a good thing can be bad definitely applies here. Consuming too much caffeine can produce the following:

Whaaat? That may be what you’re thinking now, especially after reading that last symptom. In regard to the negative side effects, an individual can over use and suffer “caffeinism” (aka caffeine addiction) due to taking 1000 to 1500 mg or more per day. To die from cardiac arrest an individual would have to consume an estimated 150 to 200 mg per kg (kilogram) of body mass. That equals 80 to 100 cups of coffee within 24 hours.

THE UGLY
The only way to reap the possible performance enhancements would be to not ingest caffeine regularly. If you do, don’t ingest any for a period of up to at least 48 hours. Like other drugs, if you are constantly consuming caffeine and attempting to get off it, your body will go through withdrawals. The most common withdrawal symptoms are: 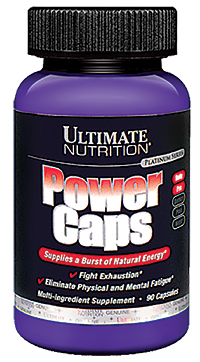 So How Much Is Optimum?

Studies suggest that consuming a small dose of caffeine 30 to 60 minutes prior to your athletic event will allow it to enter your system and produce the previously mentioned benefits. Typically, the effects of a moderate dose last up to 5 hours. The amount consumed combined with your weight, height, gender, age, medication use and health conditions are all factors that determine the reaction of individuals. So, not everyone will experience the same effects. You should speak with your doctor beforehand and you will have to determine what works best for you. While there is much conflicting information on the desired amount an individual should consume (the FDA recommends no more than 200 mg per day), you would do best not to consume more than 400 mg per day and not on a daily basis. If you are consuming caffeine daily your body will build up a tolerance to it and will no longer perceive it as an additive, thus you won’t necessarily reap the benefits geared toward athletic performance. This goes back to what I mentioned earlier – lay off the caffeine completely for at least 48 hours. On the flip side of that, individuals who consume 2 cups of coffee and have not consumed any caffeine days beforehand typically feel a diuretic effect due to a urine increase. To avoid dehydration, make sure you drink a lot of water throughout the day.

More Than Meets The Eye

If you’re not a coffee drinker or hate energy drinks, there are a variety of other products that contain caffeine that you probably don’t even know about. What do two pieces of Jolt gum, one Foosh Mint, three Penguin Mints and Sturm Food’s Morning Spark instant oatmeal have in common? Each has the equivalent amount of caffeine as one cup of coffee. Sum Seeds are sunflower seeds infused with caffeine as well as other natural energy boosters. Regular sunflower seeds are high in folate, vitamins B6 and E, with no added sugar. A serving of Sum Seeds has 140 mg of caffeine, while a serving of Perky Jerky (yes, beef jerky, too) has 75 mg of caffeine. 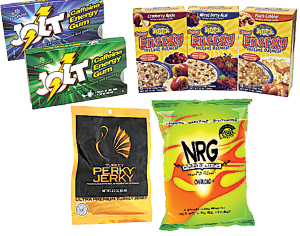 While caffeine seems to be able to provide great effects in regards to performance, it is still somewhat difficult to figure out the exact amount of milligrams it would take an individual to feel the benefits. In the end, this becomes more about knowing how your body will react to a specific amount and whether you deem the benefits worth it. Again, I suggest meeting with a doctor beforehand and advise that you be safe by only adding little amounts at a time to see how you feel. For you regular Starbucks drinkers, I recommend you check out the following website for caffeine content of what you may be drinking, as this isn’t posted on their website.
www.caffeineinformer.com